There are huge opportunities for young people who are interested in joining us on the water in Holyhead. 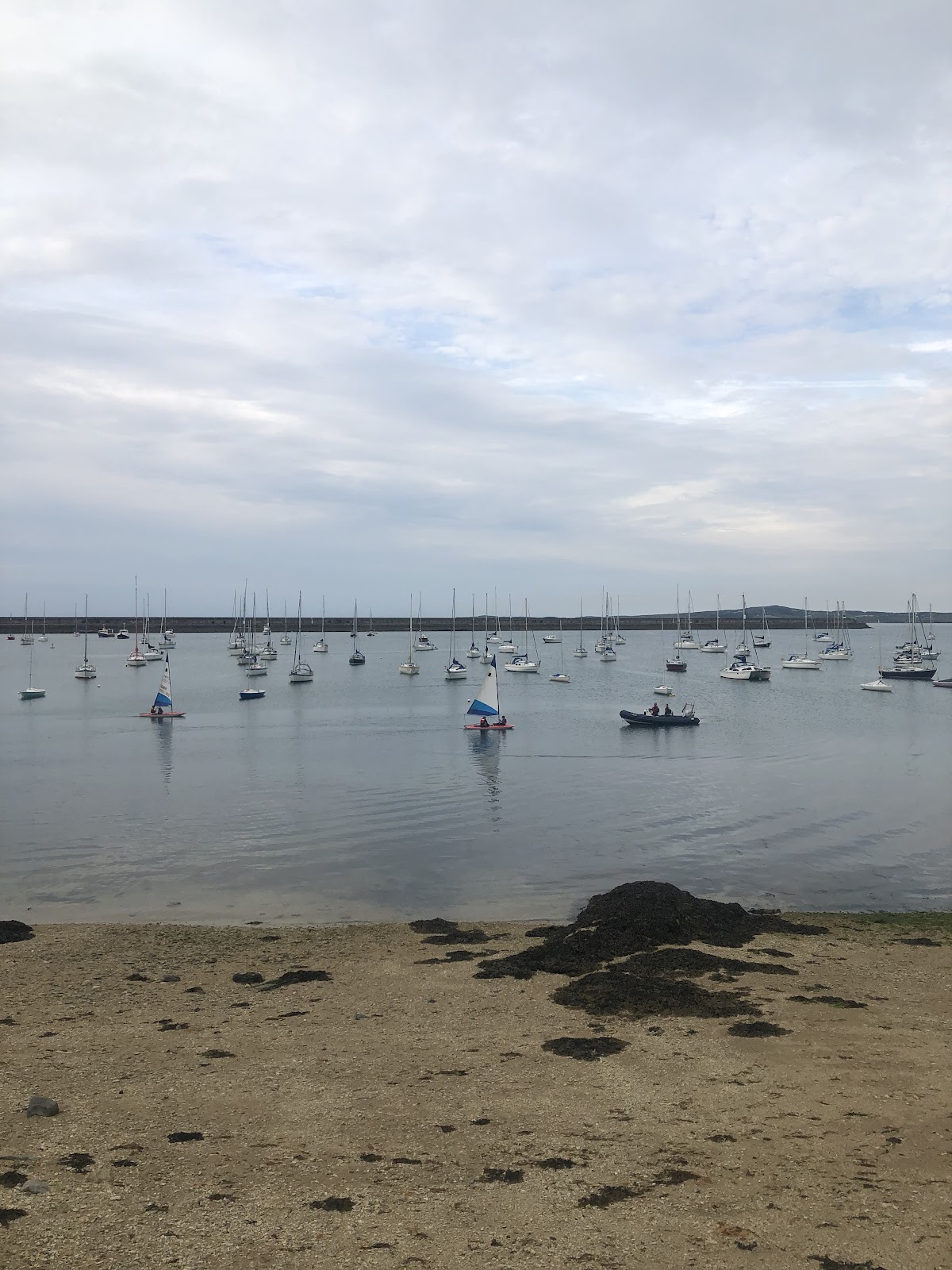 Our Thursday night cadets group now welcomes up to 15 young people each week. Their  skills vary from beginner to advanced intermediates. They sail Toppers and Fevas and we are hoping to offer them Powerboat courses next year too. This year, some of the more experienced youngsters added another string to their bow when our instructor Dwynwen invited them to train as Assistant Instructors. Now the older cadets are responsible for land drills with the younger members; they assist and train the students in rigging and launching the boats and also offer one to one support to the children while they’re out on the water. This has proved a great all round confidence builder and it’s a scheme we intend to expand on in the future. Progression is important. We’re aware that not all sailors want to compete although there are plenty of opportunities should they wish to do so.

It’s been a struggle sometimes to provide instructor cover and we are indebted to Dwynwen, Jess, Ollie and Henry for their ongoing commitment to the children and to the club. They’re all brilliant instructors and an asset to HSC.

We must say a big thank you to Jim Paton and Conor Elwin who also trained as AI’s this year. They’ve provided great back up support on Thursday evenings along with our Sailing School Principal Paul Sutton. The club couldn’t run without the support and expertise of people like them.

Over the Winter we’re hoping to offer some Saturday sessions should the weather allow and with attempts to revive the Laser fleet there’s no reason why more competent cadets can’t join in there.

Please get in touch if you know anyone who would like to join us next year.

You can contact us by email to This email address is being protected from spambots. You need JavaScript enabled to view it. or sign up using a form: Cadet Signup Form

If you’d like to help as a volunteer with the cadets, we’d love to hear from you too.

Similarly if you’re a dinghy sailor looking to qualify as instructor or AI please get in touch. 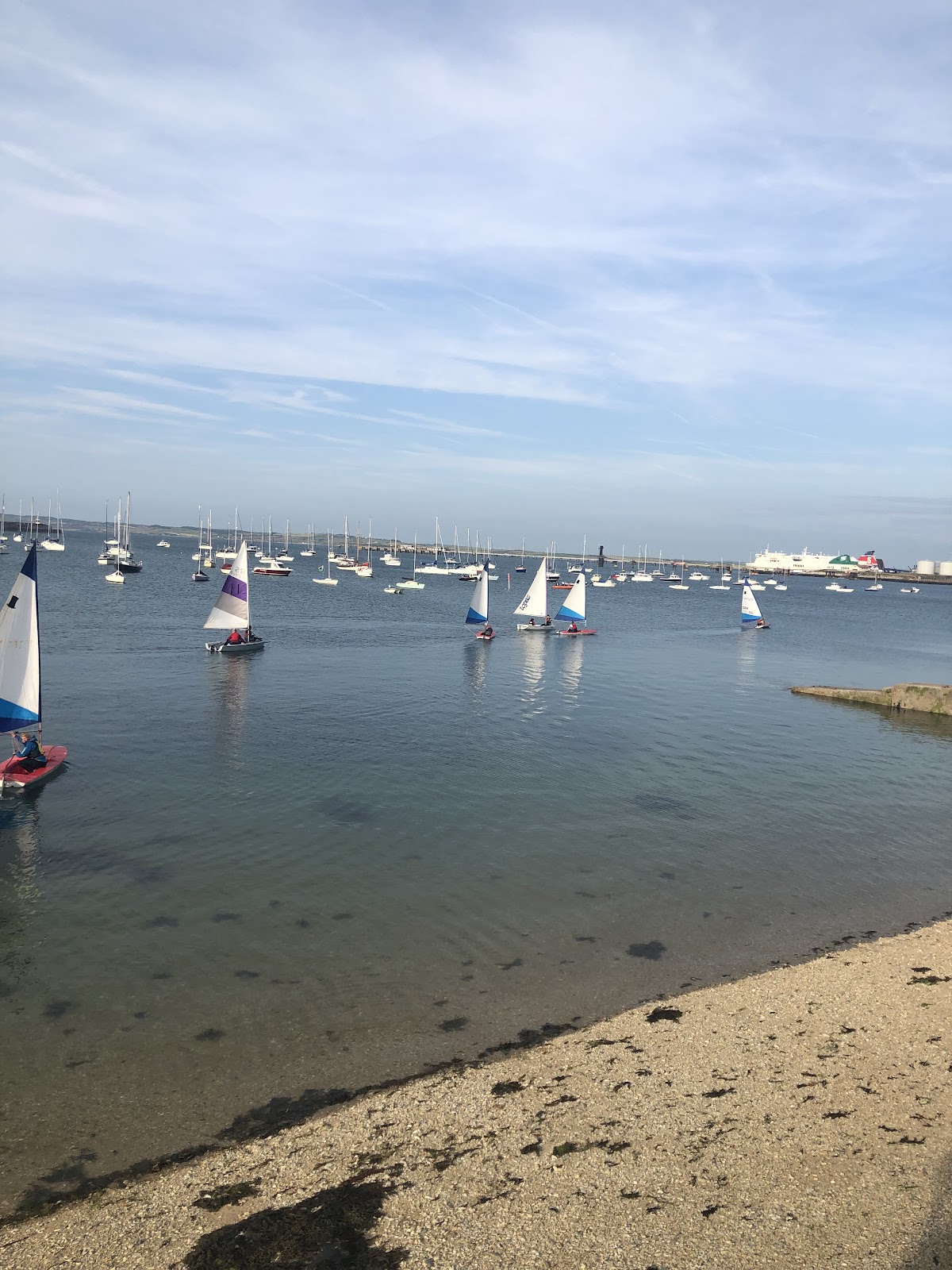 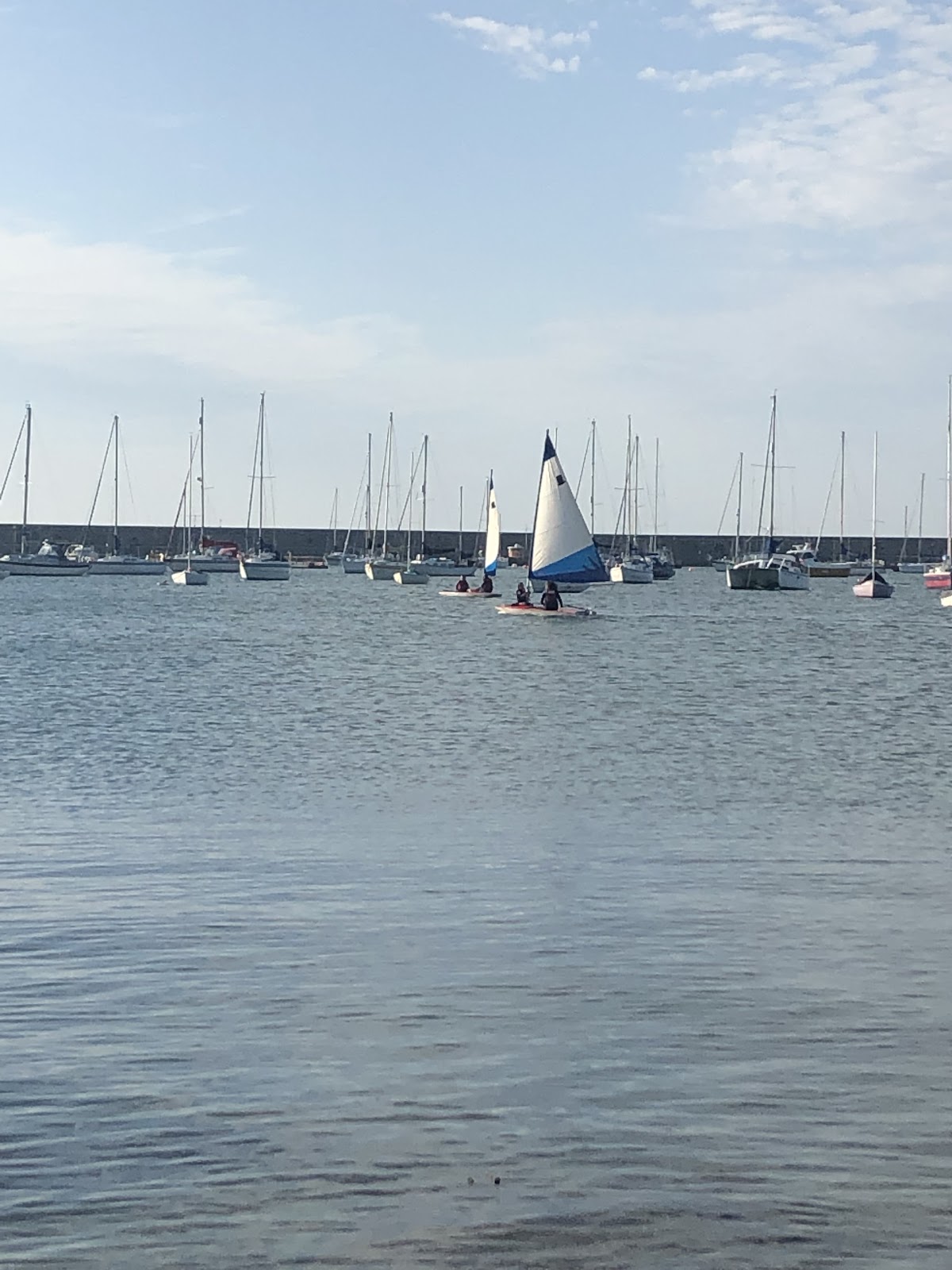 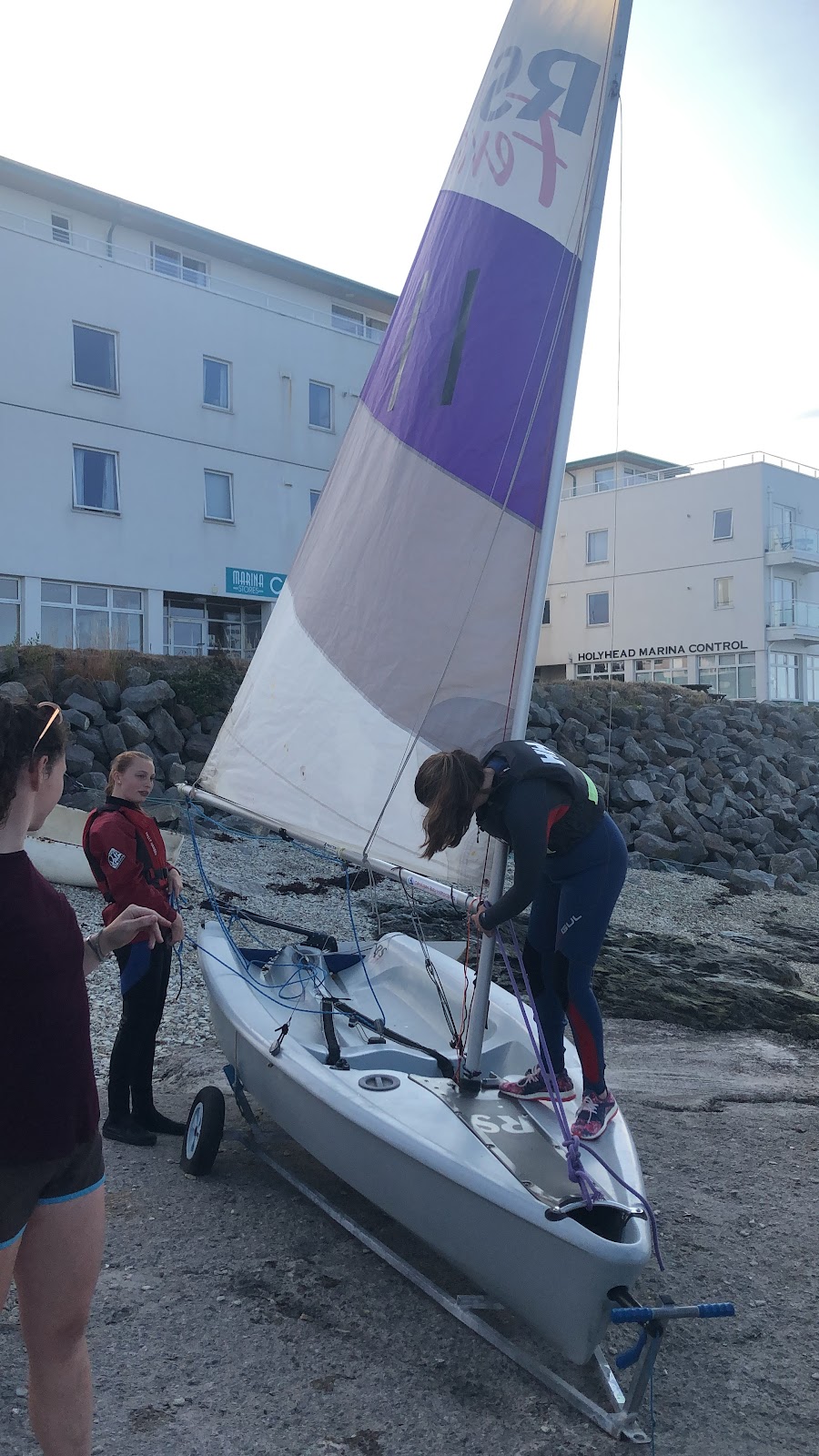 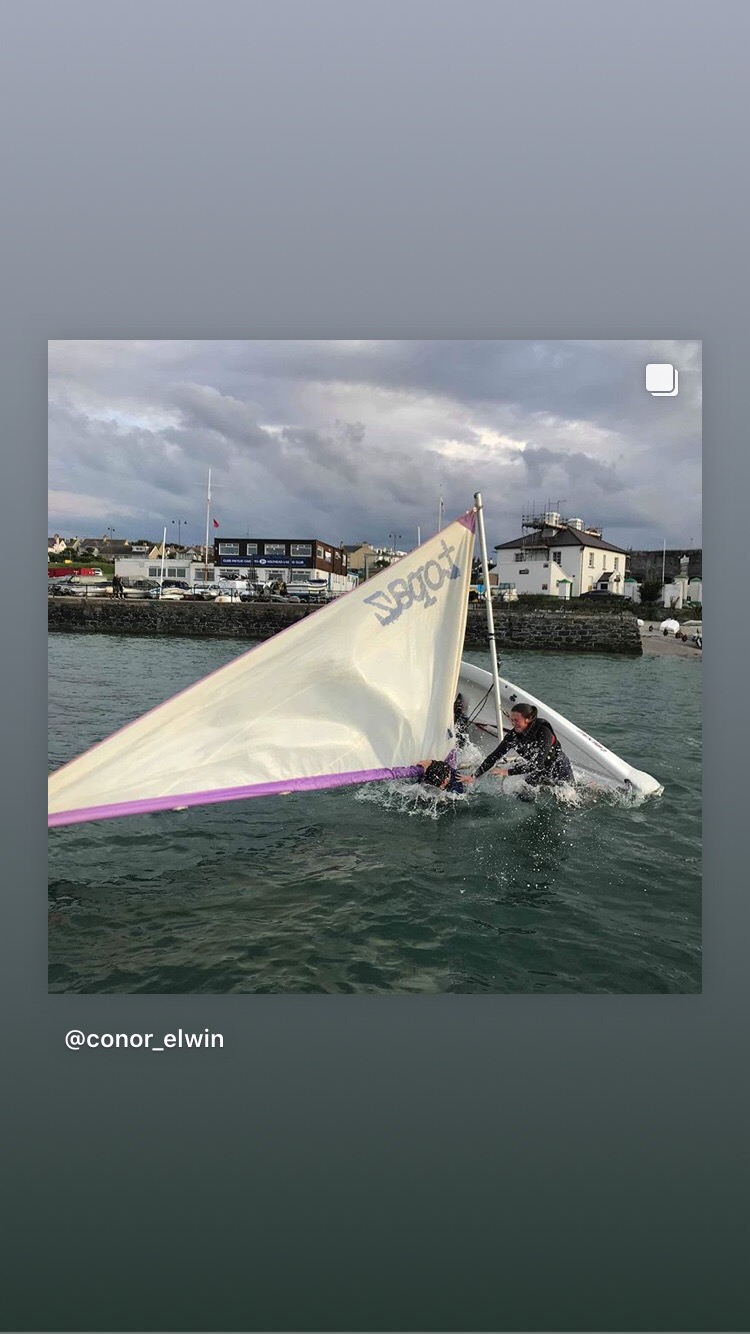 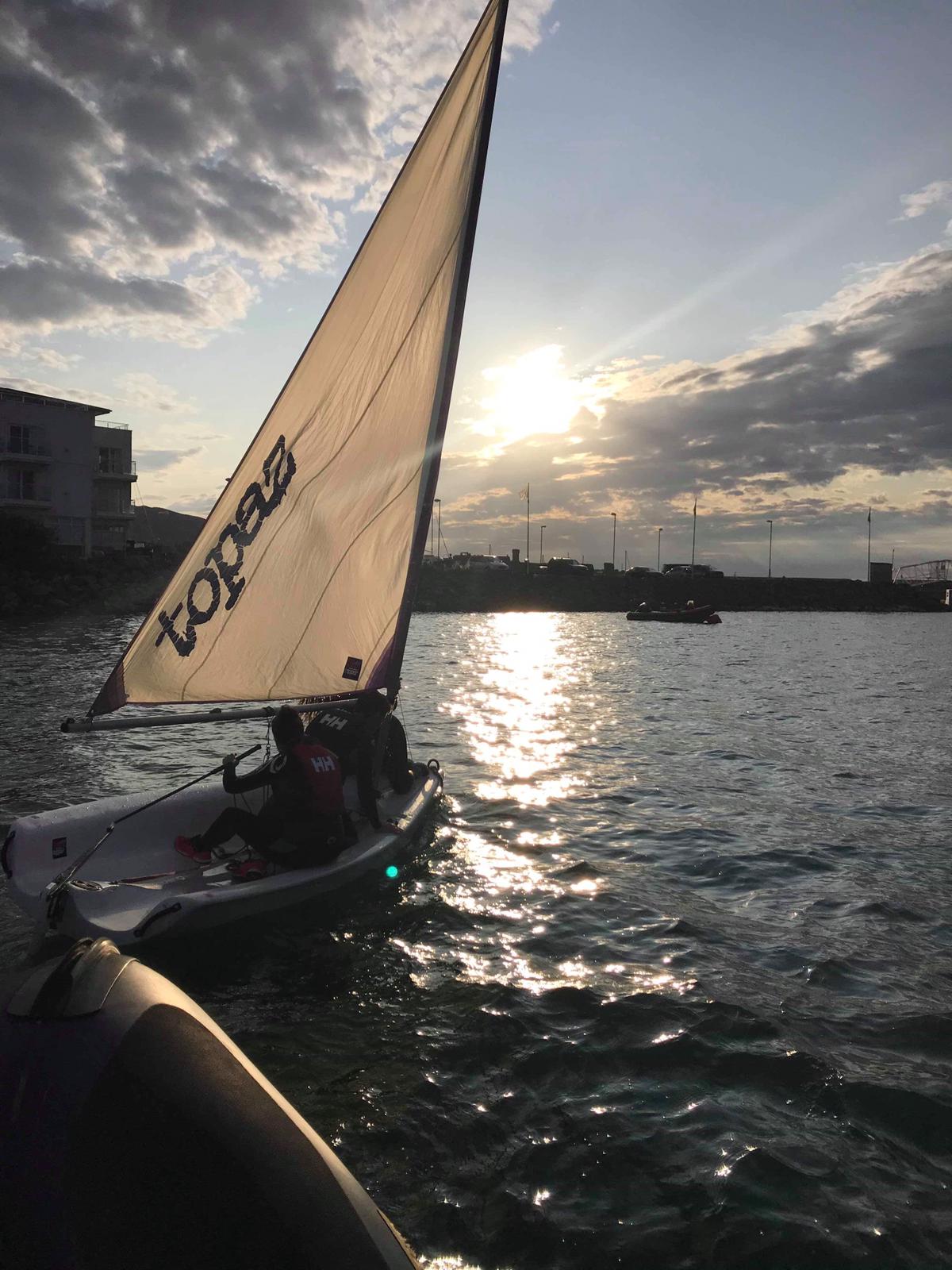 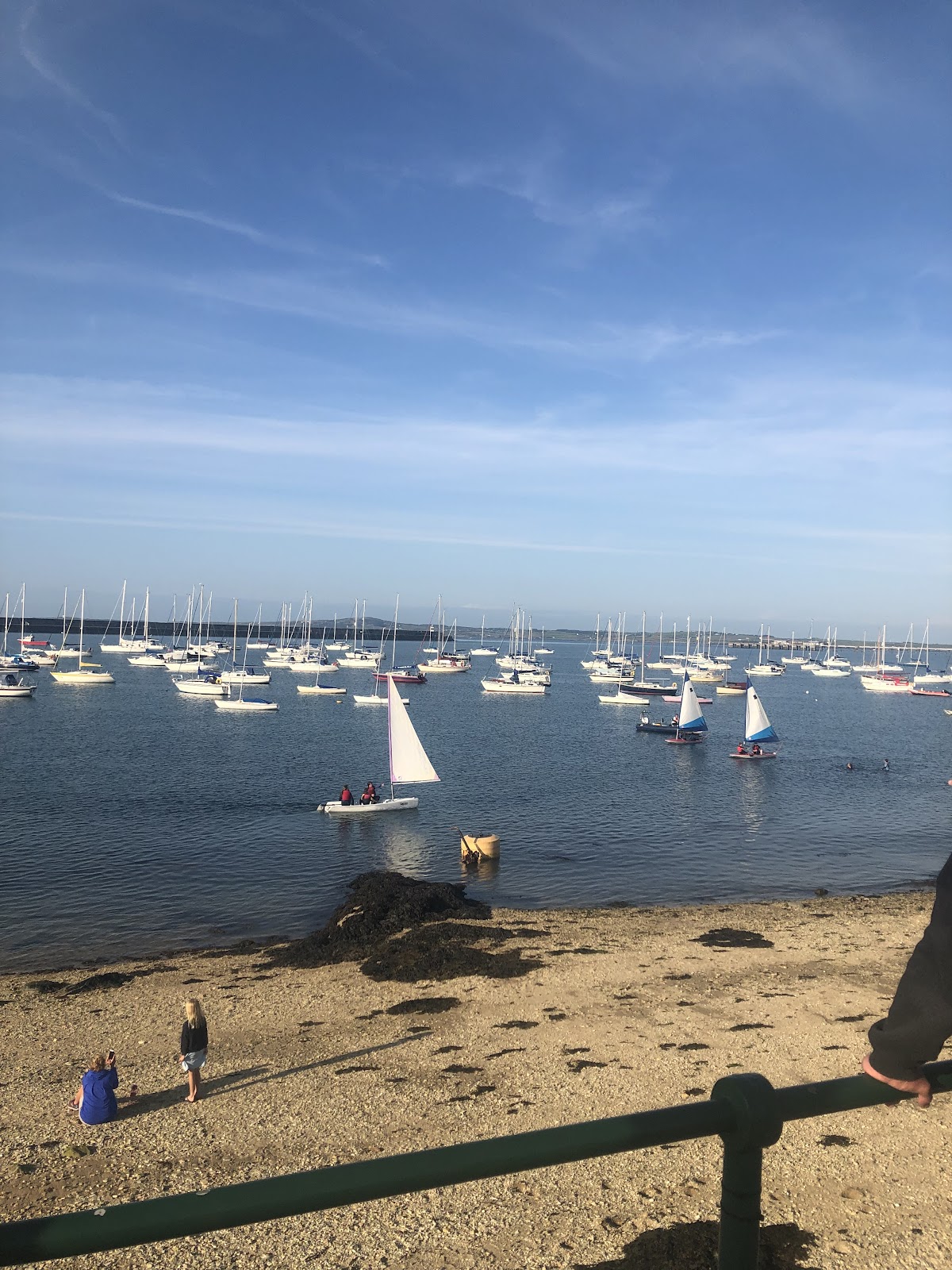 Lily's Weekend for the ISORA 14.

The last race of the ISORA 2017 season was run from Pwllheli to Dun Laoghaire with 4 Holyhead Yachts competing Pipe Dreamer VI, Harriett Marwood, AJ Wanderlust and Lily. Lily travelled down on Thursday with a crew of 5 me, Katy, Zoe, Matthias and Becca. Our planned start of 10:00 was delayed by the repairs being completed by Stuart Marine on the exhaust manifold raw water connection. Lost on route was the port hand horseshoe ring... Nothing else fortunately!
This meant that we missed our planned opportunity at the stacks and where we encountered the usual uncomfortable seas as we pushed south against the blustery southwesterly winds. Lily, reefed and using the new headsail felt very well balanced as we sailed towards Porth Dinllaen and then tacked along the Lleyn Peninsula eventually turning down through Bardsey Sound at a perfect time when there seemed to be virtually no tide running. Once through the sound we had a easy sail across Aberdaron Bay and round to Pwllheli arriving at Pwllheli Marina at around 21:45. I had arranged for Hywel to come to meet us at the Marina and take me back to Anglesey dropping Zoe back to pickup her car at Parc Menai and Katy home to upper Bangor. Matt and Becca were left to look after Lily and dry things out before we returned on the Friday evening.

Preparation for the race

We had arranged a lift with the crew bus from Holyhead to Pwllheli on the Friday afternoon. Catharine dropped me off at Holyhead Ferry Port after a quick stop for some provisions at Lidl. The bus timings had been a little vague and as I got on the bus I was told by the driver that he didn't want to drive into Parc Menai so I had to try and contact the 3 crew, Harry, Luke and Oli to be under the A55 bridge at 17:30. Unfortunately I could only contact Luke and this plan didn't work out, leaving Luke to drive the 3 crew members from Parc Menai to Pwllheli.
On arrival at Pwllheli we met up on Lily with Becca and Matt and worked on a couple of jobs before going up to the Sailing Club bar to collect the tracker and meet up with some of the other competitors.

Our last crew member Greg arrived as planned at 07:00 on the Saturday morning as we readied the ship for leaving the marina at 07:45 to get to the start for 08:30 and have some time to test fairlead settings on the jib. As usual with Pwllheli we touched bottom on the way out and I had to work quite hard to avoid the piles as I reversed with the incoming tide and tried to cross to the other side of the river. Fortunately all went well and the long procession of yachts leaving the marina gradually got out into the bay. This process took so long that the race start was delayed by 10 minutes. Here is a link to the race tracker. If you set the time on this to 08:40 you will see that Lily was second over the line following Windshift which we overtook later in the race. I have added a google map below showing the entire weekend track along with the positions Lily was at when the various warning signals were made.
From the normal Pwllheli Start Line the course ran to PSC2 and then down past St Tudwal's Island on a fetch then heading up to run through Bardsey Sound. Lily had a pretty perfect start, Harry helping on pre start tactics, having clean air as we headed up to PSC2. Going through the sound at St Tudwal's a swell started to build as the gusty winds varied under the headland but Lily held a good position with Pipedreamer and a couple of the faster yachts closing slowly on the windward side.
The passage through Bardsey Sound at around 11:00 was not as bad as had been feared but as we emerged on the northern side of Bardsey the overfalls were pretty substantial and we got slammed for a while and headed so we put in a short port leg before turning back onto starboard as we were heading around 010° - 020° and loosing out on VMG to Course. Once past the worst of the overfalls we made good progress. 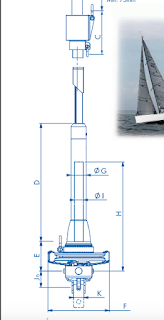 We had been trying for some time to get a better set on the headsail but we could not seem to get out the creases on the luff and it wasn't until Luke pointed out that the roller furler had come adrift and had slipped up the forestay that we understood why! There was nothing we could do but some time was spent trying to understand why this had happened. With the winds backing under the weather front as it passed over we were being headed so we tried another tack onto port but again soon got headed and with the flood tide this was sending us way too far north. Tacking back onto starboard showed the effect of the reducing tide rate and eventually as the flood tide started to kick in we decided to go north leaving East Codling mark to port and a then having a tacking duel with yacht Windshift as we headed toward Kish Lighthouse. During this patch of the race we were listening to one of the competitors who was calling the Coastguard to get assistance as they had broken their forestay. Eventually we saw the Lifeboat going out past us to the south to go and render assistance. From Kish the sea was much calmer and some of the crew gained some rest down below while we navigated in the dark into Dun Laoghaire harbour. Inside the harbour we downed sails and made an effort to sort some of the mess inside the boat out as we motored round to SB09 on the Dun Laoghaire Marina, next but one to Pipedreamer who had got in some 30 minutes ahead of us. We had come to a decision that the state of the crew after such a long race and the current weather forecast that there was only one decision, to catch the ferry back later that morning. Once we had got organised, a little, we marched off to the National Yacht Club for food and a Guinness at 03:00 on the Sunday morning! Great effort by the NYC!
Back to the boat at around 04:00 and up again to meet the taxi to take us to the Dublin Ferry Port for our pre ordered ferry passage back to Holyhead. Soon there will be a photo album to add to this blog: Album

[Please note: The website URL shown in the images is the temporary one the correct URL is www.holyheadsailingclub.co.uk ]

This guide has been compiled from feedback. Thanks to Ken (Incantation) for his feedback!

The following images are screenshots of what the site looks like on a mobile phone when you first visit.

Read more: A guide to the club website (Mobile Devices)