With a restored fleet after our members have been away racing there were 8 yachts preparing for a downwind start in 12 - 16kt WNW winds. The race officer Wendy had selected course 1 with the new starting regime of 3 consecutive start times working well.

The Class 2 fleet set off at 18:30 with Shearwater and Hydrology racing single handed. Next the suib fleet set off and then at 18:40 the Class 1 fleet started with a bit of a scrum at the IDM which pushed Flair IV to last place. Houdini and Red Eye were close to the wall and gained an initial advantage but then Passtime, being followed at close quarters by Flair, kept further south avoiding the holes in the wind between the knuckle and the spit mark. Flair finally get ahead of Passtime who was now in second place with Jaydreamer now heading the fleet. At the first mark Meath there was yet again a major convergence! Jaydreamer managed to round the mark and go about clear of the rest with Flair IV giving water to Red Eye and Jetstream and Passtime very close behind. Jetstream then had a problem with her spinnaker sheets and guys catching the mark and dropped off to do their penalty while Flair IV followed Red Eye round the mark. The J boats all flew their  asymmetric spinnakers but Flair IV and Passtime kept their genaos and there was little speed difference but they were able to hold a better line to Penrhos. 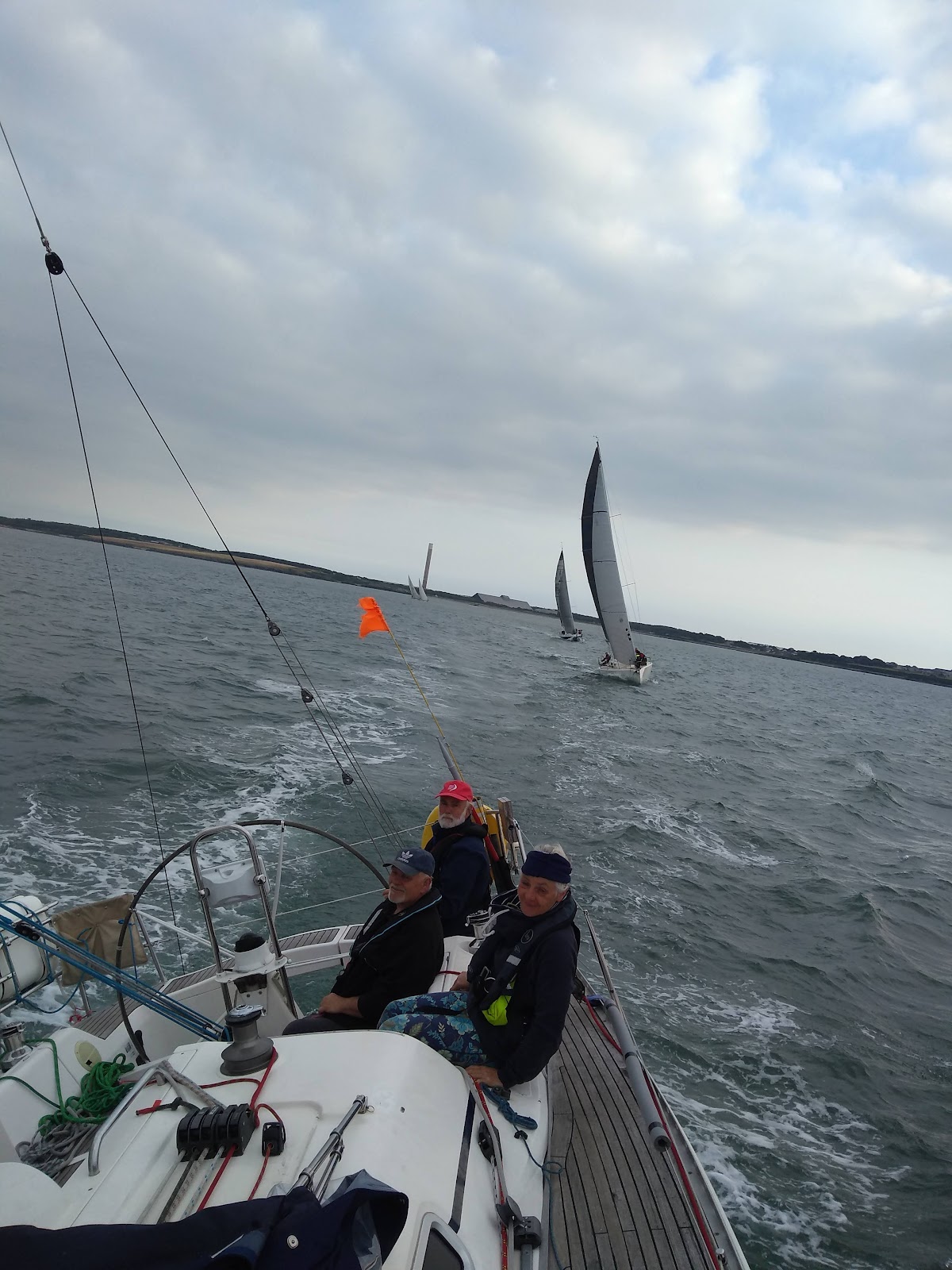 At Penrhos Jaydreamer was still ahead as the Class 1 yachts caught up with the Class 2 yachts, with Flair IV in second place in class 1 as they headed out to Clipera before beating back into the harbour. It was still all very close and as the yachts approached the finish Jaydreamer was clear ahead with Flair IV battling to stay ahead of Jetstream but Jetstream tacked to gain the bias on the finish line just piping Flair, who maintained her course just clearing the IDM, by a mere 3 seconds.

A brilliant evening's racing with Passtime taking the top spot in the IRC handicap race and this month's series whereas Shearwater took top place in the NHC with Flair taking the series.

A much better turnout with Red Eye, Jaydreamer, Flair IV, Hellhound and Shearwater all competing. THe new starting sequence with the split classes was used but with the full 10 minute difference in the start times between the two classes and the race scorred on elapsed time.

RedEye had a super start close to the wall with the SW winds making a spinnaker leg to Clipera and on to Bolivar. The asymmetrics headed out from Clipera in an easterly direction with Red eye in a clear lead and Flair and Hellhound on symetrical spinnakers could go pretty much directly to Bolivar.

The Class 2 yachts Rounded Bolivar with Hellhound ahead of Shearwater  as the Class 1 fleet closed up on them. At Meath the order was now Red Eye, Jaydreamer, Flair IV Hellhound and Shearwater all the way to the finish.

A great evening race as we wish the three Holyhead Yachts, Jetstream, Jaydreamer and Flair IV, every success competing in the ISORA Race 11 from Dun Laoghaire to Pwllheli on Saturday 27th.

Passtime of Hamble has now been added to Class 1

Last night’s race had again just 3 yachts participating as none of the J105s were around, some still not back after the Dun Laoghaire regatta week.

The forecast at 18 - 24kt SW backing S for a while and low water is at 17:39, (Spring tide) was on the mark with the tide flooding rapidly as the yachts reached Bolivar.

The revised offshore course card was handed to the contestants and the start line information was made apparent to the skippers with IDM and ODM marks now in position. The course set by the OOD Wendy was Start, Penrhos, Bolivar, Clipera and Finish. As there were only the 3 yachts it was agreed to revert to a single start and they set off at 18:30. Passtime got a good start with Flair IV flying her no4 jib and 1 reef following astern and gradually catching up to undertake before the Aluminium Jetty. Hellhound followed on with full sails.

Passing the end of the Jetty Passtime was a little overpowered and dropped behind Flair allowing Hellhound to catch up. Flair, with her reduced sails was able to sail easily on the windward leg to Penrhos and rounded the mark some way ahead of the two other yachts. Passtime second round the mark called in to retire having seen a tear in her jib while Flair and Hellhound sailed the almost dead downwind leg to Clipera and then on to Bolivar. Flair experimented with changing to the larger headsail on the leg from Clipera to Bolivar and struggled to re-set the no 4 jib before the mark so left the tack late which, in the strong current flowing SW to NE was a distinct time waster!

As can be seen from the track the tide was running strongly at Bolivar and the lead between Flair and Hellhound meant that it was even stronger by the time Hellhound rounded the mark.

Tacking all the way back into the harbour Flair pulled out a significant lead, once again showing that the start times for the different classes makes a big difference. Very gusty conditions prevailed as Flair crossed the line near the wall as the new ODM is very close to the wall and the effect of the Knuckle even in SSW winds is pretty difficult.

As I was away last week I am not sure what happened with the race last wednesday.

A warm welcome to Red Eye the latest J105 to join in the racing at Holyhead.

Following concerns over the slower boats getting disadvantaged by the tide and the wind dropping on summer evenings for this race series we are tested the theory of two separate starts with the slower boats starting before the faster class. As Wendy was not available for OOD this week Mark, while trying to sort out issues with reinstalling her mainsail and the exchange Raymarine Chart Plotter, was also attempting to get the race starts organised. Finally having delegated it to one of his crew the 2 classes set off at 18:40 Class 2, and 18:45 Class 1. Red Eye with Flair IV in Class 1 with Shearwater and Carpe Diem in Class 2.

The course set was offshore Course 3 on the new Course Card Start, Bolivar (s), Clipera(p), Penrhos(s), Clipera(p) and Finish with a distance of around 9Nm

The winds were 10 - 18kt SW with very little swell ideal for a good race.

The Squibs start was at 18:35 and this allowed the Class 2 yachts Shearwater and Carpe Diem to start at 18:40 and follow the Squib racers out of the harbour. With the Class 1 boats starting at 18:45 Shearwater and Carpe Diem got most of the way up to Bolivar before the Class 1 yachts caught up on the almost dead downwind leg. In the rush to get sorted Flair was having a struggle after having to sort out various repairs following the weekend on the 100th IOM Midnight Race from Liverpool to IOM. Flair had elected to go with the Code 0 from the start but as she turned downwind it was obvious that it was too deep an angle for the code 0 as they turned downwind at the end of the breakwater.  A problem developed with the roller furler on Flair IV’s code 0 so she had to sail at more of an angle to keep up the speed rather than going directly to the mark. Red Eye had deployed her asymmetric spinnaker and was comfortably ahead of Flair by the first mark.

As Flair had a significant crew turn up for the evening it was agreed for some crew to swap vessels giving both Shearwater and Red Eye some extra hands.

Over the water the result was Red Eye, Flair IV, Carpe Diem and then Shearwater; with the same order on NHC Handicap with Carpe Diem just 1 minute and 27 seconds behind Flair IV.

The small entry for this race was due to the other two J105s have travelled to Dun Laoghaire, along with crew members from Passtime and Houdini, after the weekend’s IOM Race to compete in the DL Regatta. We look forward to seeing them all back next week.

In review after the race it was agreed that the dual start was a good idea but that it ought to be a 10 minute delay from the slow to the fast boats.

The results for the first July Wednesday Evening race are now in the system see the links above. The course sailed was Start, Clipera (s), Penrhos (p), Bolivar (p) and finish. Wendy was OOD. There was only Houdini in the IRC Class on Race 1. Sorry I have no further information at this time.