A super turnout for brilliant sailing conditions with 9 Entries. Class 2 offshore started at 18:30 with some radio chatter on a bit of confusion with Class 2 and Squibs, with the Squibs starting at 18:35.

The offshore course 11 was selected by Wendy, our race officer, was an excellent choice for the condition giving upwind legs and more or less a dead run down to Bolivar. The first excitement was the collection of the Squibs and the Class 1 yachts at the end of the Aluminium Jetty; all managed to avoid any collisions as they dropped their spinnakers for the turn onto a fetch to Penrhos.

At Penrhos Houdini was leading Class 1 from Jaydreamer with Flair IV, Red Eye and Jetstream all converging on the mark together. Flair as windward boat stood off and was able to turn tighter on the mark getting better drive up towards Clipera. In the lead for Class 2 was Carpe Diem with Shearwater and Hellhound following. 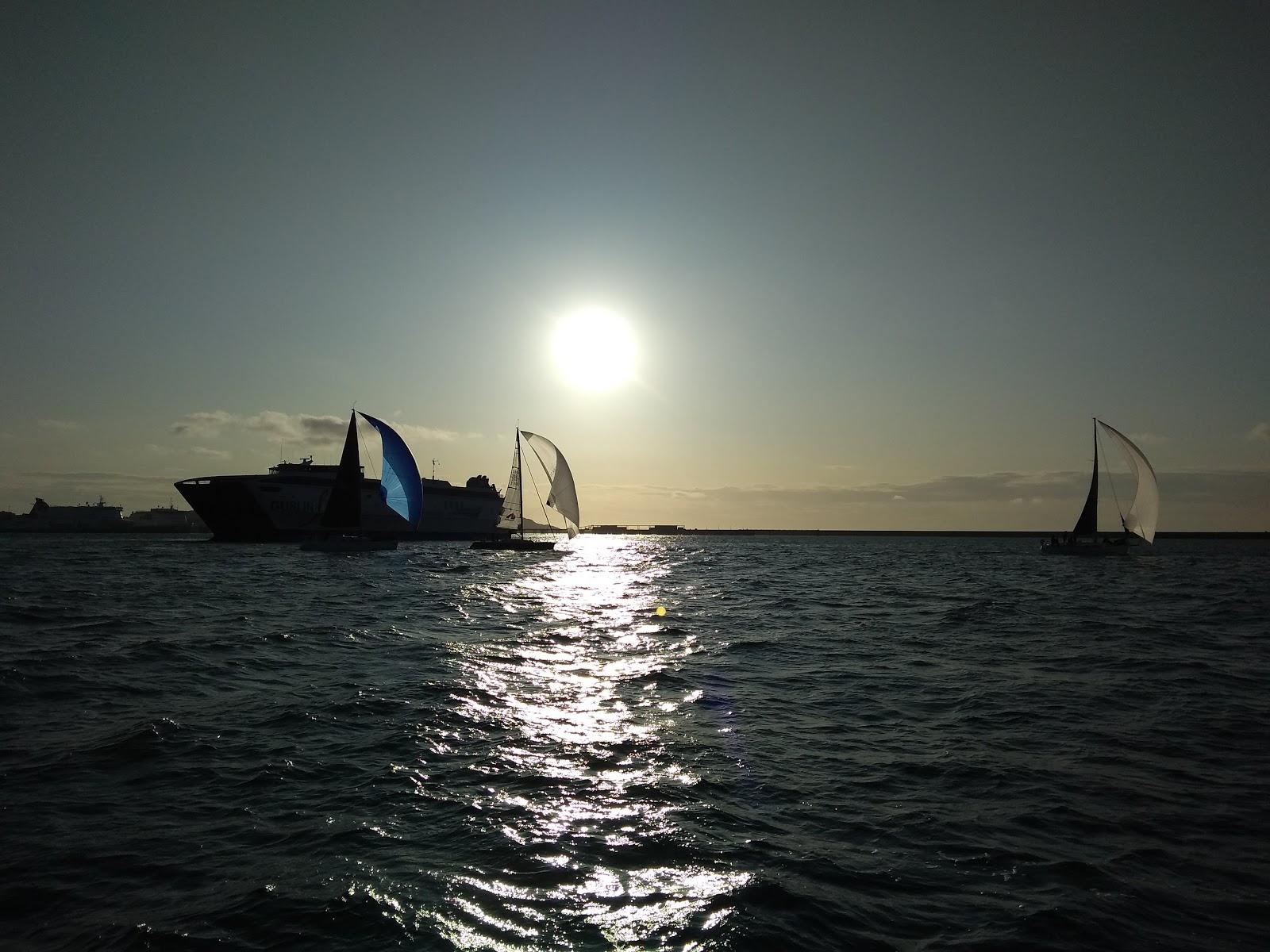 There were some odd features on the leg from Penrhos to Clipera in the form of the Jonathan Swift manoeuvering around following, what I think was refuelling at the moored tanker. This caught out Hellhound who got a little blanketed by the ship’s high freeboard! Shearwater managed to clear before she was affected too much although a suggestion over the radio was for Shearwater to head for the middle!

At Bolivar Jaydreamer managed to cut back into the mark behind Houdini and ahead of Flair with Red Eye and Jetstream following. Flair managed to sail a higher track than the two following J’s on the beat back towards Clipera as Houdini and Jaydreamer battled it out for the lead. Passtime continued to make good progress and had overtaken Shearwater and Hellhound from Class 1, Carpe Diem on the other hand had yet to be caught as the yachts tacked to head for the harbour. 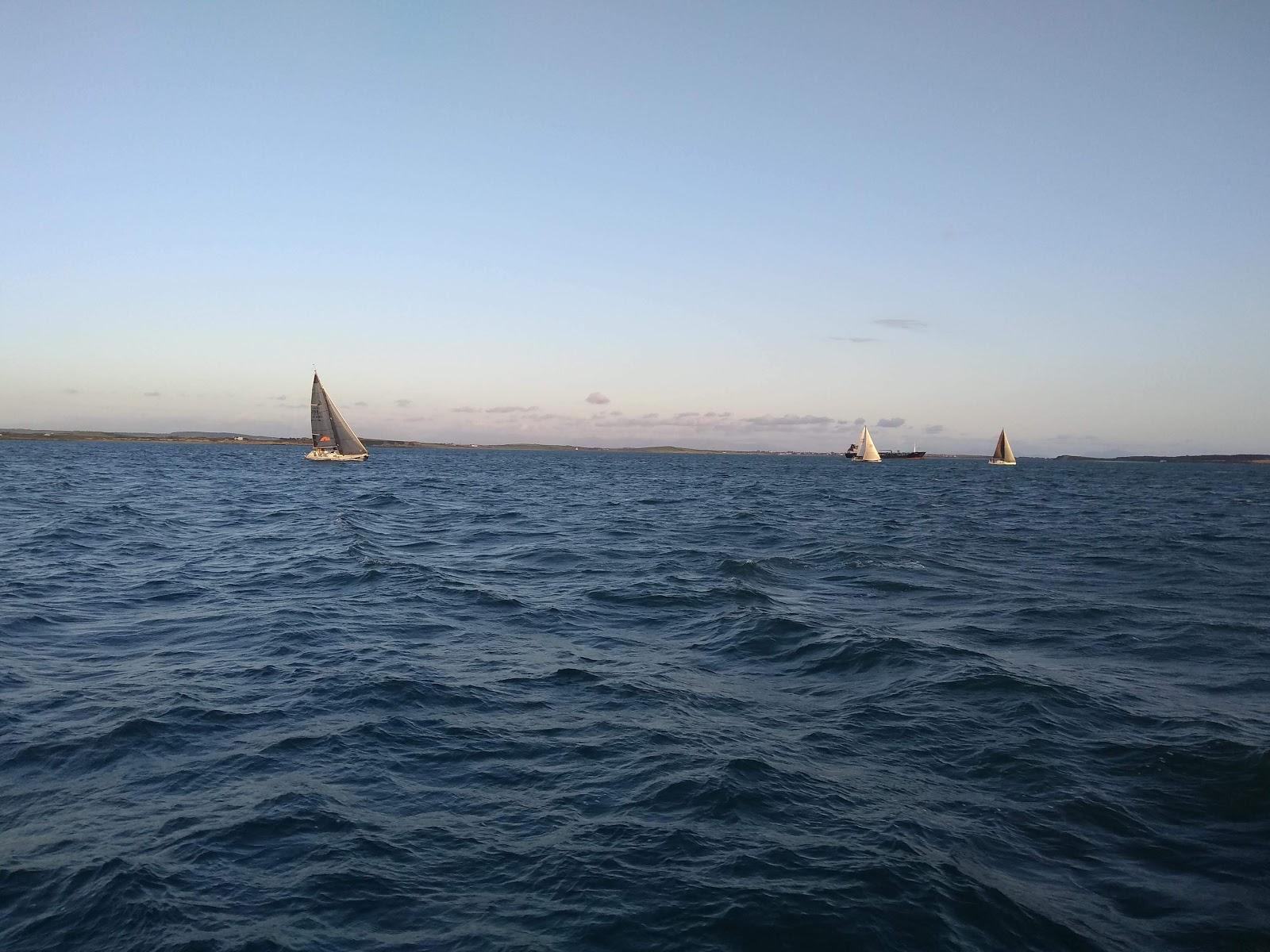 At the finish Jetstream had just managed to catch Houdini and crossed the line some 45 seconds ahead, 3rd was Red Eye, 4th Flair IV then Passtime, Jaydreamer,  Carpe Diem, Shearwater and Hellhound. A truly fantastic evening sail again here in Holyhead.

A much smaller fleet came out for this race although we welcomed back Carpe Diem after a few weeks away. The conditions appeared good for the race with a 12 - 14kt WSW wind giving a spinnaker start and Wendy the race officer had selected a great course of Start, Clipera (s), Penrhos (s), Clipera (s), Penrhos (s), Meath (p) and finish. The class 2 boats, Shearwater and Carpe Diem, started at 18:30 with the Squibs starting at 18:35 and the Class 1 boats at 18:40. Both the squibs and the offshore yacht courses were to Clipera on their first leg so it looked a bit confusing as the class 1 yachts approached. 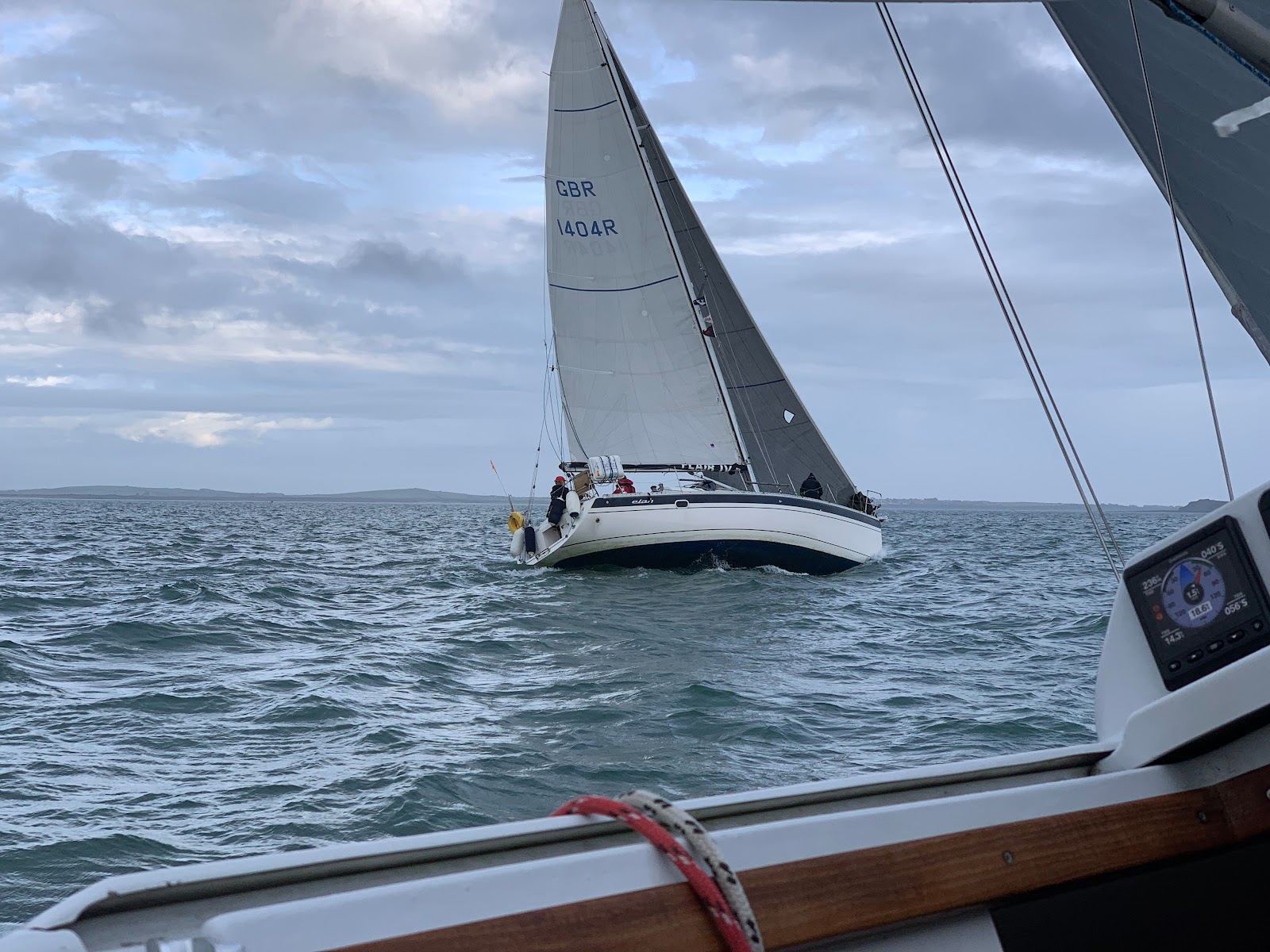 At Clipera Flair had established a small lead over Jaydreamer but this was soon overcome on the beat to Penrhos. These two yachts had caught Shearwater by the 2nd mark and as they rounded Penrhos for the first time Jaydreamer raised her asymmetric and headed out slightly higher than the direct route which Flair took with her standard kite. With Passtime following Jaydreamer and Flair all spinnakers flying they reached the buoy without incident and headed back to Penrhos but Jaydreamer still retained the lead as they rounded the mark. 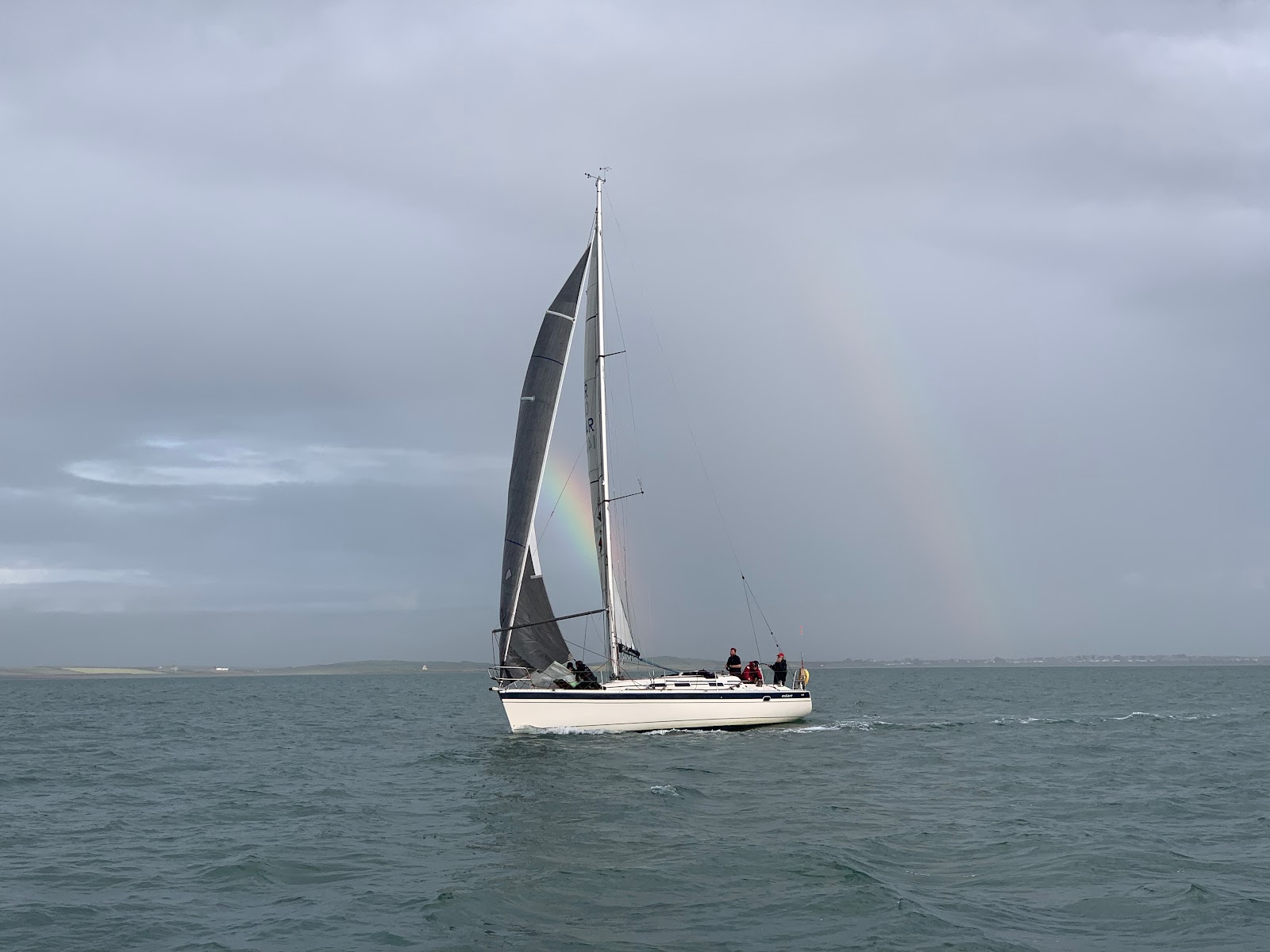 Now there was a formidable dark cloud forming over Holyhead mountain and on the next spinnaker leg to Meath all was going well until there was a sudden wind direction change and increase to around the high 30’s causing issues for the kite flyers with Flair broaching and having her spinnaker acting like a very large sea anchor until she recovered the remarkably undamaged sail. Shearwater called in to retire and after re-hoisting the jib, Flair continued to the finish but now in dead last until a few metres before the line where she overtook the 2 handed Carpe Diem battling to the finish. 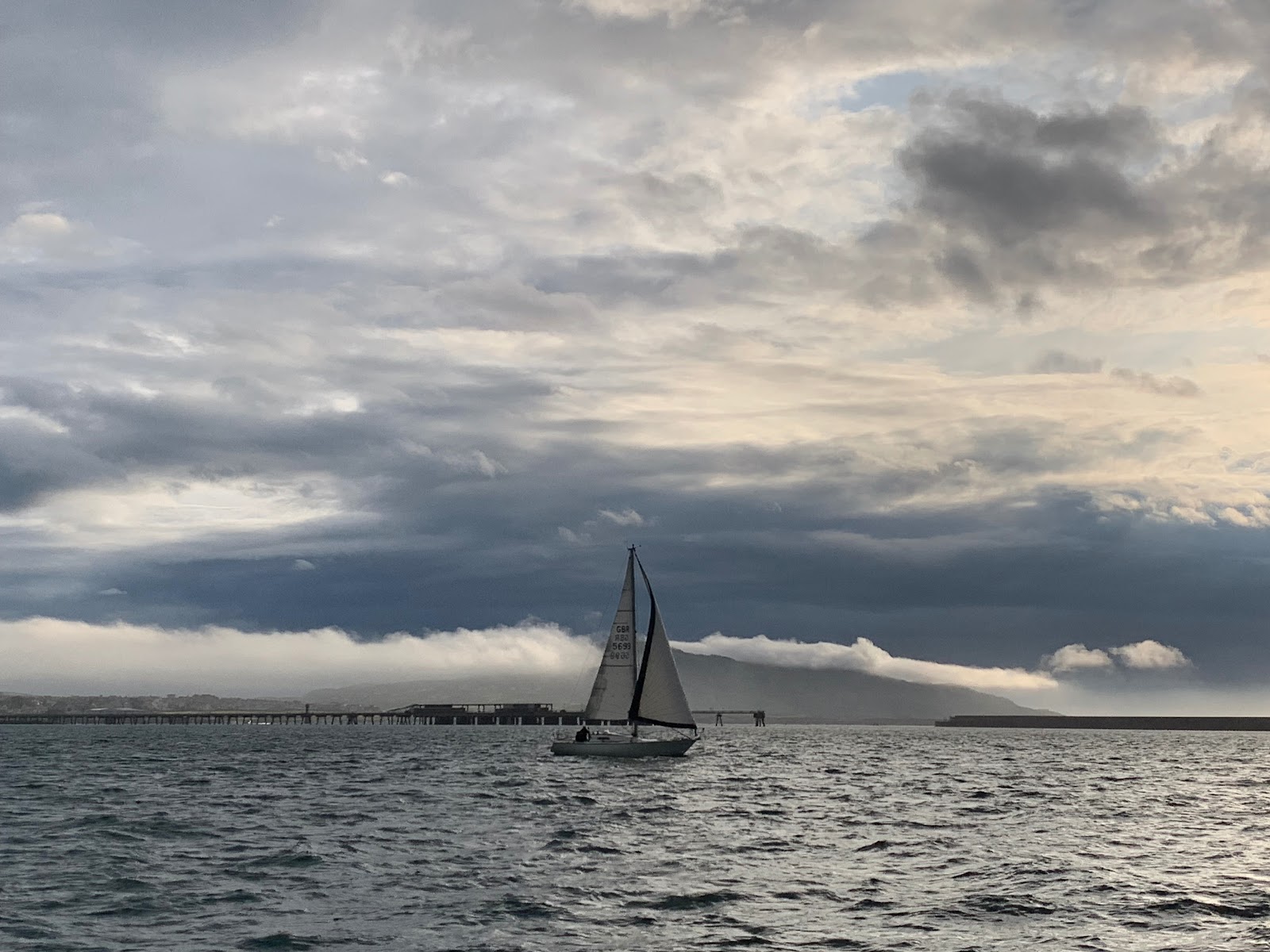 It was certainly an entertaining evening of sailing and much to talk about back in the clubhouse!

Thanks to Richard Beckmann for the photos.

With an enlarged fleet of yachts numbering 8 entries for this race the Race Officer was Dawn, our Sailing Captain. She set an “X” course which was Start, Clipera (S), Penrhos (S), Meath (P), Coast (S), Clipera (S) and finish an excellent course for the wind conditions. The Class 2 yachts, Hydrology and Shearwater set off at 18:30 with the Class 1 yachts setting off at 18:40 after the Squibs start. 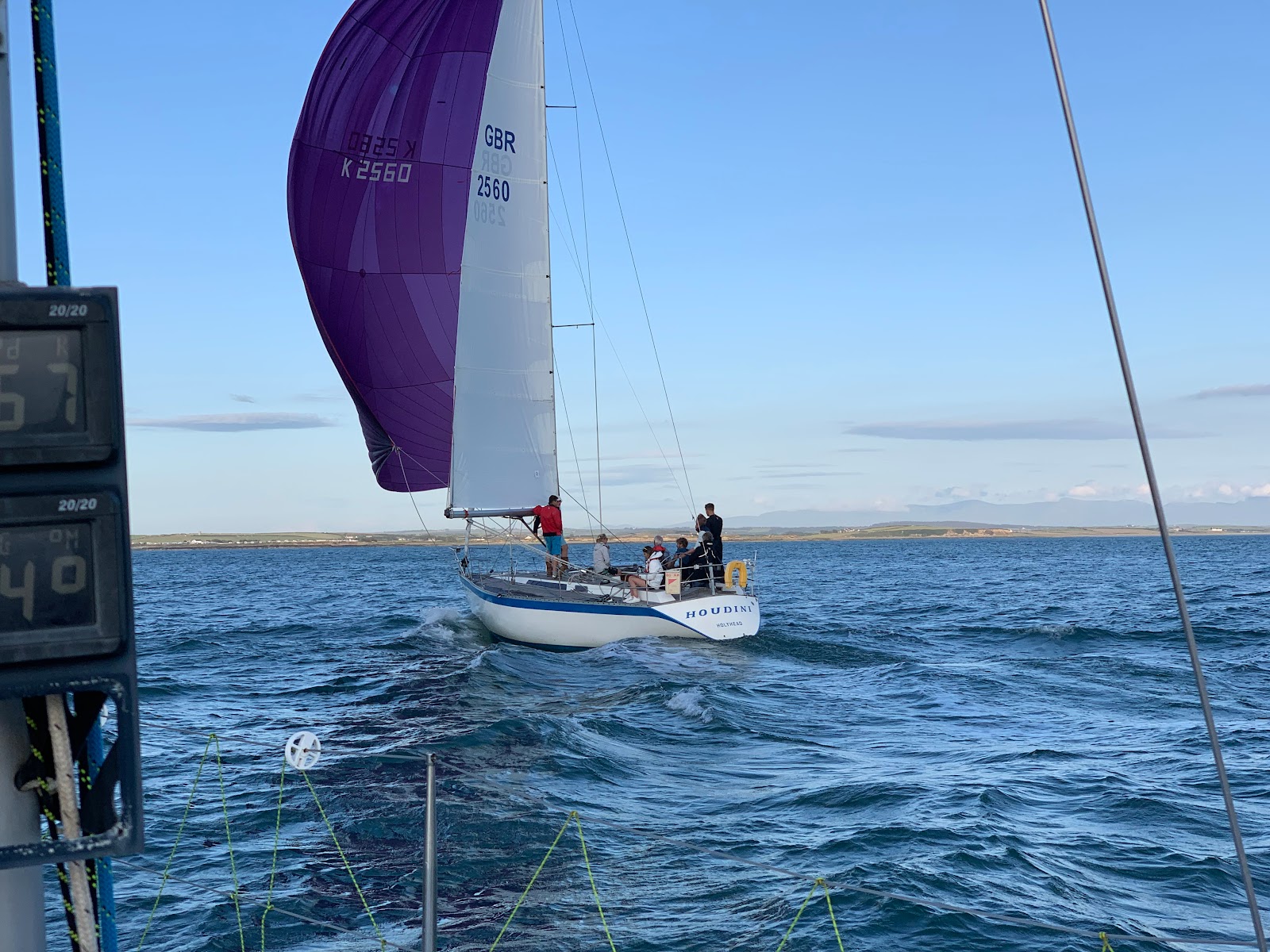 The class 2 yachts made it to clipera before the squibs but there was a croud of squibs at the first mark by the time the Class 1 approached. Houdini got a great start as usual with Jaydreamer, Red Eye, Jetstream, Flair and Passtime following on.

Some of the yachts were struggling being short handed but all managed to successfully navigate with spinnakers and dowsing them before Clipera. It was very close at Clipera with inches between Flair and Houdini. With the J’s coming in on Port tack after gybing. 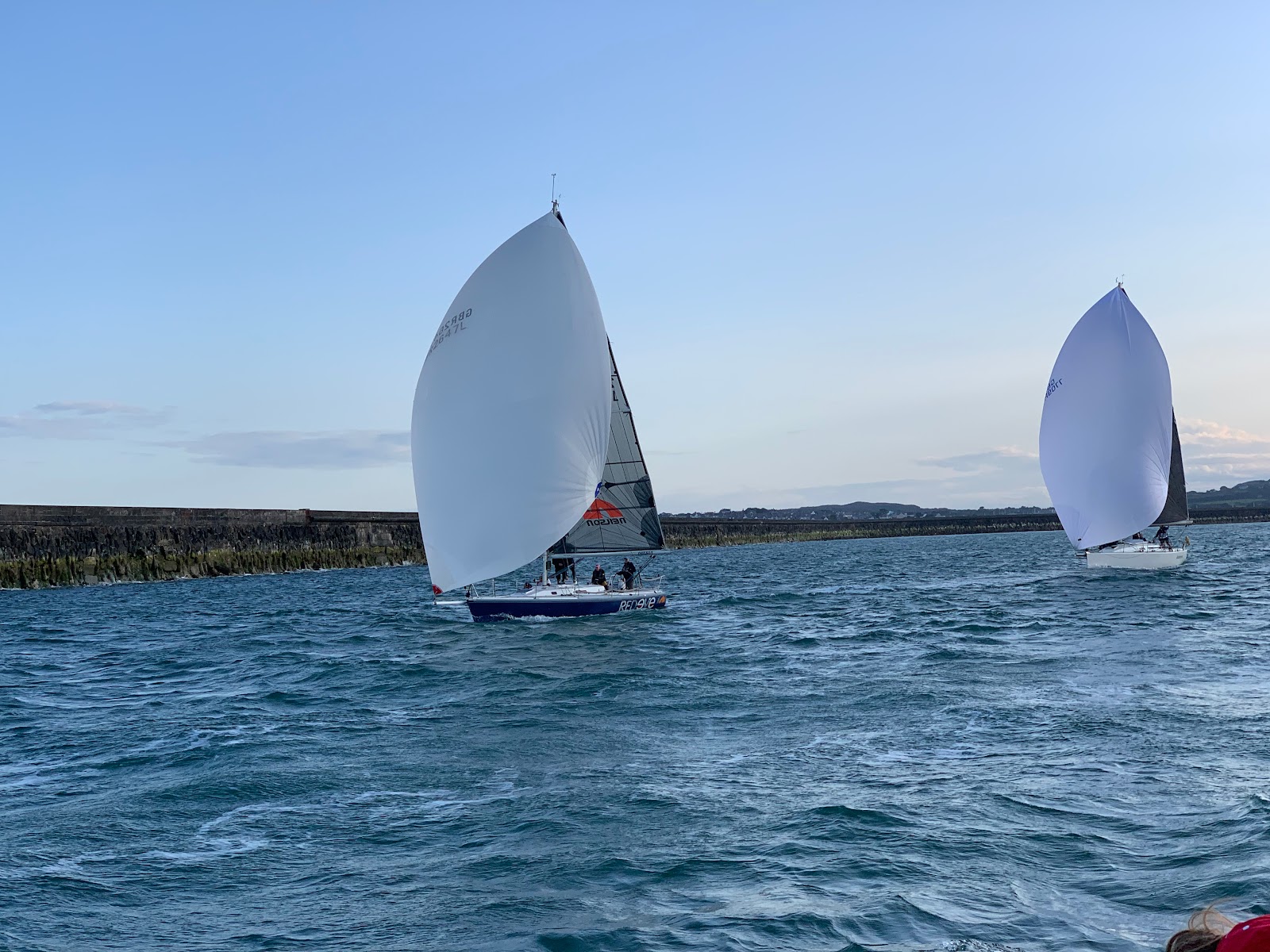 On the beat to Penrhos Houdini maintained and extended her lead over Flair with Jaydreamer holding the lead over the water. The other two J’s tacked twice to stay above the struggling Flair and overtook her as they approached Penrhos. Hydrology had retired on this leg due to a sail failure but Shearwater managed to round the mark before most of the fleet. Passtime was bringing up the rear. Round the mark the asymmetric spinnaker boats made really good progress and Flair was slow in deciding to hoist so lost out a lot on the leading boats. At Meath there was a clear gap between Houdini and the J’s back to Shearwater, Flair and Passtime. 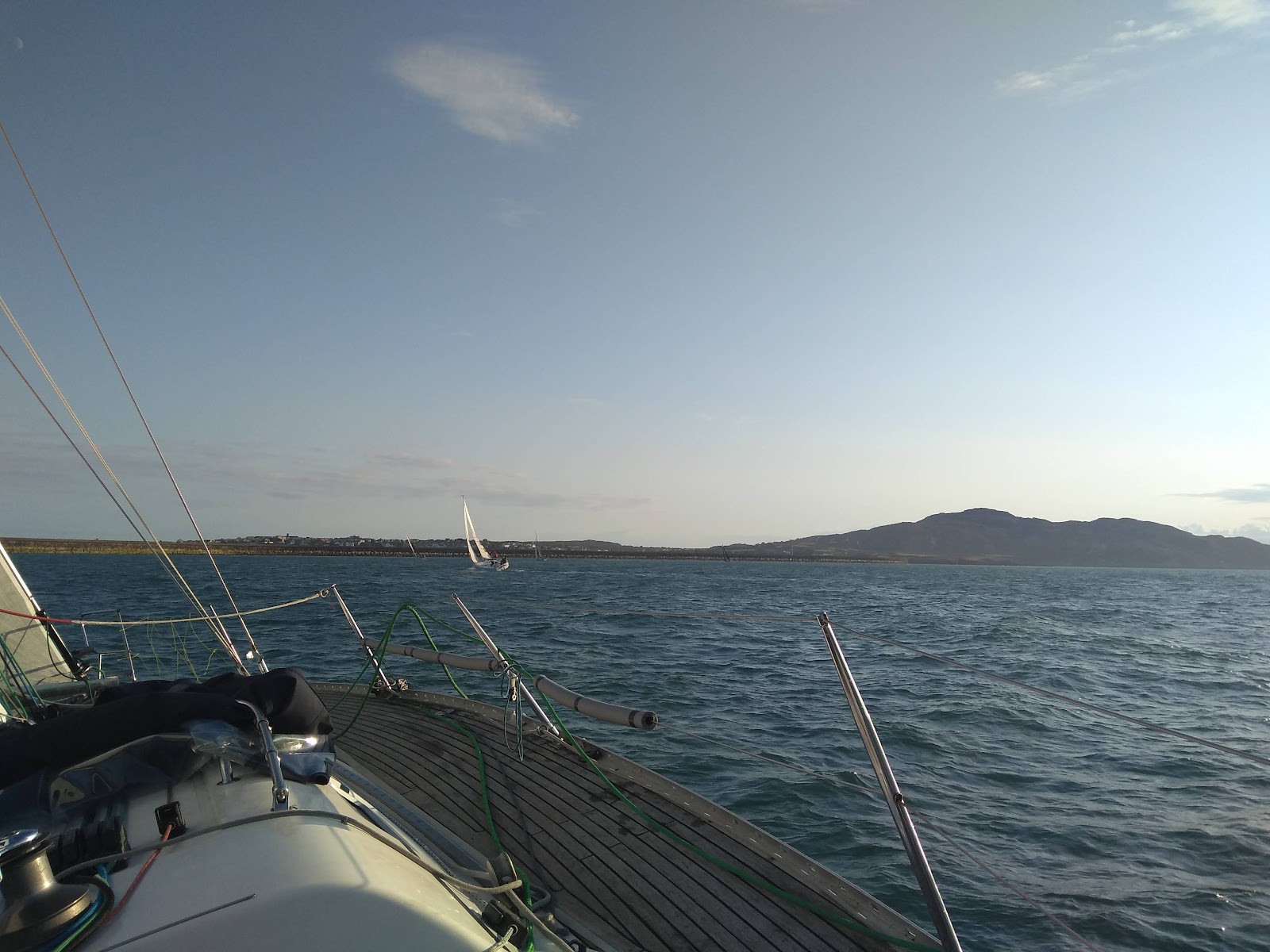 Houdini stayed out to the north while the other yachts tacked back towards the breakwater. All the leading boats were again in close proximity as they rounded Coast as they headed back to Clipera and back into the harbour.